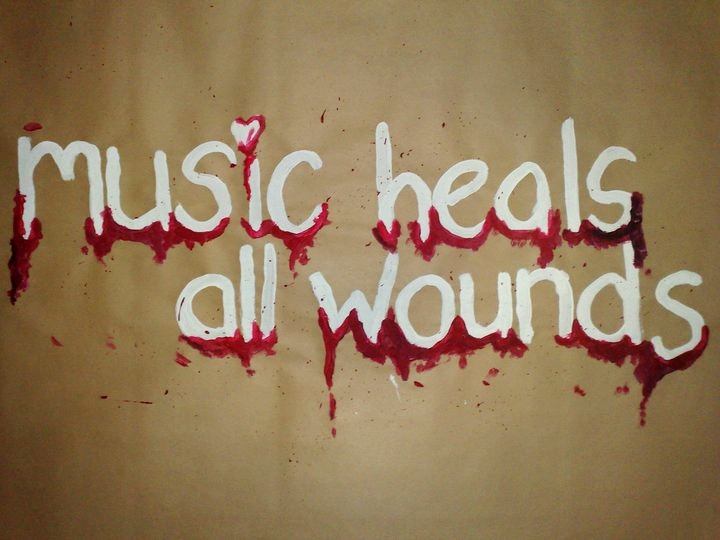 I have always been a huge fan of music, as long as I can remember. At the young tender age of 4-5 years old I loved to dance to the song, Fre’re Jacques. Over and over again on my record player this song would play. I had my own routine and dance for the song. I spent a lot of time listening to records when I was home alone. My memory is of me finding something to do while I was home alone. My mother was never home and my older brothers were often left responsible for me. They were of no age to be responsible for themselves and of course they left me home alone, regularly. These were traumatic times in my life and from the very beginning I used music to heal my wounds. I was afraid and wouldn’t it make sense to dance and sing to get through it. I knew all the words and my brain would just follow the song, over and over. I remember crying at the repeating record as it skipped on certain pieces of the song. My tears had nothing to do with the lyrics, they were of fear and rejection. Interestingly, now I realize the song was about “Brother John”. My brothers were at the age of drug experiments and partying all night. They were both into trouble at the time and I remember standing at the side of their bed wondering if anyone would wake up to interact with me. I was a very lonely child, usually home alone.

Later in life I fell in love with happy, positive music like the Monkees. I found their music through a television show, it was my best friend for most of my youth. I watched a lot of sitcoms, I felt like they were often my friends and family. I loved family sit coms but with the Monkees it was fun and comforting. I could identify with the music, the characters, and the goofing off. I managed to obtain the tapes for the Monkees, The Beach Boys, the Turtles and some other music similar. This was the 1980’s but I was in love with the old music of the 60’s. Through exploration of that genre I was even presented with a familiar voice, Janis Joplin. The music of the 60’s comforted something inside of me that I now recognize as the peace keeper wishing and dreaming of peace. At the time I just thought I might be a bit of a hippy or “free spirit” as one of my stand in “moms” calls me. All of the women that stood in my life to mother me when mine was absent would listen to music from that era. So this type of music tends to sooth me in a way a mother’s lullabye does. When I discovered the Monkees deeper and discovered songs like “I wanna be free.” I found myself dreaming of something far and away from my lonely and sad situation at home. My struggles were lost in the soothing music – like the vibrations soothed my heart. I often felt heart broken as a child, abandoned by my mother and siblings. I was convinced I wasn’t worthy of love.

With a childhood of sexual abuse, physical abuse and obviously severe neglect I was lead to anger in my teenage years. There is no surprise as rebellion is part of our local culture in America and the 80’s and 90’s were certainly no different. I was drawn into music again, it defined me in my coming of age years. I became a bad ass with a leather jacket and satanic T-shirt. Dark clothes, suicidal tendencies, drugs, alcohol and I was a regular smoker at age 12. I went deep into the darkness and hated the world. I met my boyfriend, who later became the father of my child and my husband. Long Hair, dark eyes, over 6 foot tall, and a bad ass to stand in front of me while I expressed my anger a the world. I started with Guns N’ Roses – Call it my gateway to metal. I later dived into Metallica, Slayer, Danzig, and Suicidal Tendencies. This became the music in my ears every day, all day at school – if I went. At home I played it so loud on the stereo my mother would freak out, now that she was home. My blind father bought me the stereo, he didn’t live with us. My walls were plastered with posters and articles about the musicians that created the music. I mean every single space was filled with their images or words about them. I had framed photos of Axl Rose and worshiped them, like most teenagers do.My metal phase branched out into Punk and Death Metal. The music took me to the dark places that had been created by my childhood and helped me really get into those places. The music took me to the dark space I needed to be in to feel it fully and then heal. Again and again I would play songs to either piss off my mother who had suddenly taken an interest in my life, after 12 years of absence o. She found AA and was trying to make up for the time she missed while she was drunk and stoned, frankly it was too late. I hated her thoroughly and was even driven to attack her. We were often physical and my teenage years were full of rebellion, anger, fights, running away, drugs, alcohol, and later teenage pregnancy. My pregnancy ended the relationship with my mother until my son was 8 years old. The music did something for me and I felt it as I began to raise my son, after several years away from my mothers presence. I recognized it emerging inside me and realized that I had moved away from it. I used anger as a defense to keep people away from the person I was afraid they would reject. I was angry that I had experienced what had happened to me as a child. Why did other families have experiences like the sit com “Family Ties” and I was left to eat peanut butter and jelly or cereal every day cause that was all I knew how to cook.

Later as a mother and young adult I fell in love with music that had gorgeous voices like Janis Joplin, whom I still love. I fell for singer after singer, later I will notice they are all females or gender benders. Loving George Michael, Prince, and Elton John I was lead to the LGBTQ community through music. Then I heard Cher and that was all she wrote. This music roused something inside me that is a big piece of who I am today, a GenderQueer Transman. This music got into my soul and the culture around it made it okay for me to be ME. This was profound and sparked tons of change through my life and even today when I do an Elton John or George Michael piece in a drag performance I find it to therapeutic. These are my elders who has carved a way for feminized males. Regardless of they personally identify they went on stage in a more feminine way and celebrated their masculinity. They celebrated being fabulous men, an inspiration to who I truly am. I became involved with the Radical Faeries who also supported my desire to be a fabulous man. I came out as transgender soon after being involved in their spiritual trainings. Cher of course took me to Drag Queens on and off stage, they became my sisters. We understood each other in a way that has been special ever since. People assigned male were wearing dresses in clubs and I bonded with them right away. Later the people that bent gender became my closest friends, because I could identify with them. Thank goodness I knew them because they really helped me out of a very tough closet. Being a gender bender is no easy place and its very complicated. I need the family and community of drag and transgender people, without them I would be lost and alone again. Thank you Cher for being THAT musician.

Today music still plays a big part in my personal healings. Songs stand out to me and I find myself repeating them. As if the vibrations have some sort of effect on our soul, as if the vibrations heal the wounds. Music’s magic is a mystery to most of us but most of us have some sort of healing piece associated with music. Today I use music to increase the effectiveness of healing. In Yoga, I listen to MC Yogi, Nahko & Medicine for the People, and even special vibrational music like the Hang PANArt music from Bright Hawk’s work with Sacred Side Project. I am more aware today, at 40 years old and my experience with music has brought me to an understanding. Music speaks to our souls, our values, our history, our pains, our joys, and is celebratory in most cases. Celebrating relaxation should never be underestimated, hang music does that for me. I was inspired by the Sacred Side Project to create a business that would both fullfill my needs to travel and heal as well as provide a solution to the needs for more music, validation and touch in long term care facilities. I was inspired to create and now am partnered with Bright Hawk for Let’s Dance Activities. A program that uses music to heal and uplift the communities it visits.

I find myself revisiting all sorts of music from my past as tools to get in touch with what I am feeling. Even the negative emotions need to be visited – anger, sadness, self loathing, and even feeling sorry for ourselves. Whatever comes up I use music to help me feel it fully. I sit in it long enough to be sure the feeling is felt then I find inspiration out of the darkness.

When I am ready to be inspired I listen to the prayers of some of the most unified music and progressive evolved music available today with Nahko and Medicine for the People, MC Yogi, Franti and Polish Ambassador. That’s my medicine now. Learning to DJ right now feels like the obvious evolution for Izzy Ahee – my masculine performer and music lover. I am grateful to support Bright Hawk as she evolves as the newest positive singer/songwriter with her Hang PANArt.

This is my son, I am having a very hard time dealing with his passing. I can’t get past it or the questions and the whys. I wonder every day is he ok. I can’t just turn off being his mother and missing him and worrying about him. I can’t leave my house most times. I beg for signs . My heart is just broken. 💔💔 thank you for letting me be here, and to get this off my chest. ...

Can someone tell me anything about him I'm having dreams that are really messing with my head. I need to not be scared to sleep anymore or I'm gonna loose my mind ...

Which one is true for you??Would be interesting to know if anyone has any of these and any experiences 😁🖤 ...

This is my aunt. She unexspently has passed away. Its very tragic. Nobody knows what happened. Plz somebody help me. She was loved so dearly and we need answers! Thank you ...

Post a picture of your loved one for a free psychic medium reading. Please say thank you, please validate. ...