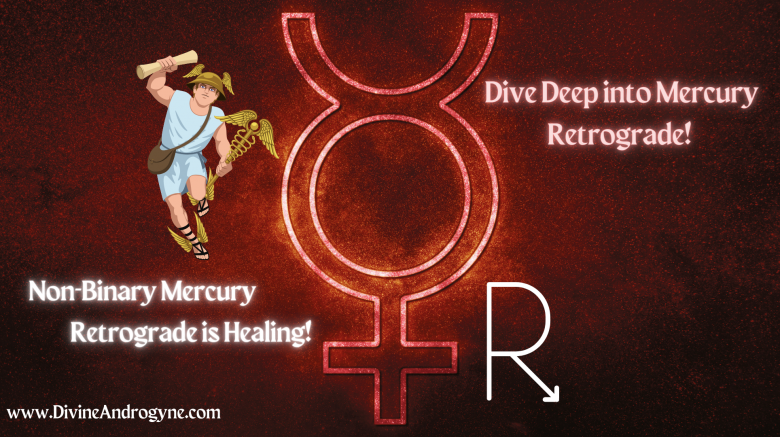 My experience with Mercury Retrograde has shifted over the years. I used to be afraid and worried because there were times I found myself making all sorts of mistakes during Mercury Retrograde. My heightened awareness of the time would also manifest anxiety and pushing me to worry more and more. This is NOT how astrology was meant to serve people. In fact, it’s the opposite!

I began to study more and more astrology as I lived my life because I did realize there was SOME effect of Mercury Retrograde and the moon was certainly effecting me and those around me. I began to dive deeper into astrology and now after 25yrs of study, with the last 2 years intensive study I am ready to emerge with some wisdom. I feel like MERCURY is actually the one pushing me and since they rule my chart I am not surprised. I keep feeling the call to spread astrology, teach astrology and push aside the stereotypes and misconceptions about all sorts of astrology topics. My first is MERCURY!

I feel like Mercury is a kin to me because of their gender bending ways and their rulership of my chart. After a lifetime of experiencing Mercury Retrograde I find myself pulled to begin with them. Notice I use gender neutral pronouns for Mercury, because Mercury is a gender variant planet. Gender Variant people need examples of ourselves just like men and women, we so deserve Mercury, the chaos of Mercury and all fast forward motion they bring when they are forward again. When we embrace and love Mercury’s pot stirring ways we actually realize that mercury is a healer, notice the symbol of healing in their hand.

All planets/zodiac signs have usually two sides and much that can manifest when they transit in the sky over points related to our personal natal chart. It’s hard to say that one planet/zodiac is completely bad or good, because there is so much more than just the planets experience. The best way to understand a total expression of a planet is to understand that zodiac, house placement and aspects will effect how it comes through for you. So one Mercury Retrograde could be challenging when another one is actually a blessing, especially if you have mercury in retrograde in your natal chart or mercury is aspecting a part of your chart in a positive way. Not that challenges are not good either because with challenging aspects we learn and grow, which is essential in life. From the Darkest places comes the Brightest Light!

The action of Mercury Retrograde is actually when, from the Point of View of Earth, the planet is going backwards. It’s not really going backwards but it looks that way. So what does that mean? Mercury represents communication, messages, technology, and media while the retrograde transit usually brings reviews, edit, slowing down, corrections, revisit, and endings. So you put the two together and you quickly see what happens there? In actuality it will greatly depend on your placement like “what zodiac is it in?” and “what house is it in?” and “is it aspecting any personal planets during the transits?” I have had things break down, like my car! I have had computers go frizzly or communication breakdown. I have also had opportunities to tie up loose ends, finish that procrastinated project, and clear up my communication with someone. How and to what intensity Mercury Retrograde effects you greatly depends on its placement. I encourage you to look at your chart and get to know it, because astrology is your map and guidebook to life! Some of us are not effected by Mercury Retrograde much at all, 25% of humans on earth are born with Mercury already in retrograde in their natal chart so when it goes Retrograde as a transit they find themselves in a more comfortable state or just not bothered by it all that much. Some of us, like me, are highly effected because Mercury ‘rules’ my chart, this means it’s a strong influence on my chart because of my sun sign, Virgo is ruled by Mercury. Although, I have also learned that in my progressed chart (changes as you age) I am actually more ruled by Uranus & Scorpio in my now older years. Now, I also have a lived perspective about living with a strong Mercury placement and I have a few suggestions.

Over the years I have learned that when Mercury Retrograde is coming then I prepare. I first fix anything that was about to break…. ya know the tune up you have been procrastinating or your computer that has been running super slow and inefficient. I also try to sign any contracts outside of the time and make mental notes about what might need to be revisited, edited, reviewed or finished up during the Mercury retrograde period. I have noticed that things started in Mercury retrograde often won’t last, but again, that is NOT always true. It really would depend on the transits and WHERE mercury is in retrograde for you each time.

Mercury has a shadow period where it begins to enter shadow that we may see things begin to show up. That is about 2 weeks out from when it goes into Mercury Retrograde and when it comes out. So you will hear astrologers talk about this time as the shadow period. We will enter that shadow period this April 30th of 2022 and it will go until June 3rd and two weeks after that is the shadow period. Mercury Retrogrades happen a couple times of year so there are many of us with Mercury Retrograde in our natal chart. Which has a way of effecting the same areas but usually the person overcomes it pretty early in life because they go through these shifts several times a year. Mercury is a very fast moving planet so we learn the lessons from it faster than we do from other slower planets like Pluto.

Mercury has a reputation for being chaotic most because of their gender bend and in that I can relate with this planet. To be Gender variant often feels like your chaotic but in actuality the stir to the pot is needed! Deeply and greatly Needed on a level in order to heal all of humanity. Humanity greatly needs to step away from binary expression as it has lead us into separation and an othering among humanity. We are all human beings and our expression is fully unique in each situation, that is the message of the gender revolution! In that, I see Mercury retrograde as a healing time. A time to review and edit things in your life that need you to revisit. We all need to revisit certain relationships, ideas, beliefs and actions because our greatness will greatly increase as a result. Most of us have had to write a paper for school and when we do the first draft, we learn, it is not usually the best because we likely made a few mistakes. Yet, if we have it edited once or twice we usually get a better grade on that paper. Editing is vital to any writer and this is the time to do that, with your life, with the area of life that Mercury is transiting for you now.

EXPLORE WHAT ROLE MERCURY PLAYS WITH YOU!

When this happens, it's usually because the owner only shared it with a small group of people, changed who can see it or it's been deleted.
View on Facebook
· Share

Hi...how often do you have contact with a medium? It becomes an obsession for me but every time it's like he's talking to me and I need that so much to keep going. I am with a grief group, a psychiatrist and I take medication and the world still ends for me every morning. Almost 7 months ago and I'm so tired.😭 ... See MoreSee Less
View on Facebook
· Share

Any suggestions please? I didn't know I was capturing more than subletting. Could be nothing? Could be something? I'm curious to know more ... See MoreSee Less

Does anyone get anything? He's gone 10 weeks now amd I'm struggling so hard. He is my everything. I'm so lost ... See MoreSee Less

Please - We need your help!!This man disappeared on December 10th...no one knows what happened to him..he was found dead 6 weeks later...If anybody here feels drawn to him and can help to clear up the circumstances and cause of his death, we will be very grateful and appreciate your help!!! Every single tiny clue could help!!Thank you in advance 🙏💔 ... See MoreSee Less